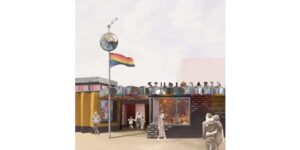 In Barking, the Studio 3 Arts centre is being remodelled by Citizens Design Bureau, with the addition of a new studio space made of strawbale. The School of Natural Building is building the extension. The straw bale walls were raised in August, and are being plastered with clay on the inside and with more weather-resistant lime plaster on the exterior.  In October, I joined the course in clay plastering.

The first stage of work was to fill any gaps between the bales and the door and window frames, using twisted bundles of straw. Filling these gaps is crucial for good insulation – and straw is a much better insulator than clay or lime, since it holds trapped air.

Twisting handfuls of straw into small packets reminds me of the desperate winter of 1880-81 that Laura Ingalls Wilder describes in The Long Winter. The snowed-in family ran out of fuel and the children had to spend all day twisting hay into tight bundles so that it would burn more slowly and give them some heat. We, however, only had to spend an hour or so twisting straw before going on to the next, messier, stage.

We mixed the deep red powdered clay with water to create a ‘slip’, the consistency of double cream. We added handfuls of straw to the slip, aiming for a mixture ‘like a well dressed salad’ – every stalk coated with clay, but not dripping wet. This mixture was stuffed into the remaining crevices around the timber frames, and used to ‘dub out’ any hollows in the bales themselves, or between them. 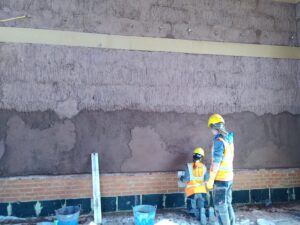 This straw and clay mixture has been used by builders for hundreds of years. Earlier this year, I spent some time looking at  Whitehall Historic House in Cheam, to write an audio descriptive guide for blind visitors. The central part of the house is over 500 years old, and provides  a wonderful insight into Tudor building methods.

In the attic, the structure is exposed, a vertical ‘crown post’ supporting a ‘collar purlin’ with arched rafters like ribs of a whale, the wood deeply furrowed and pockmarked with nail holes. In the downstairs cafe, sections of the wall have been broken open to show the material stuffed between the vertical timbers. In some places this is ‘daub’ – mud applied to woven lath or ‘wattle’; in other places it is a mixture of straw and clay called ‘rye dough’ – exactly the same stuffing we’d used on the new studio in Barking.

Surely this is what Hamlet is thinking of too, when he describes how Alexander the Great and Caesar, once turned to clay, might be used to seal a barrel or patch a wall:
Imperious Caesar, dead and turn’d to clay,
Might stop a hole to keep the wind away:
O, that that earth, which kept the world in awe,
Should patch a wall to expel the winter flaw!