In the morning I met up with a friend on the first day of her new job in central London. She had asked me to accompany her from the station to the office as she learnt the route – she is from out of London and is blind. It’s an area very familiar to me on foot and bike, but in the ten-minute walk, I was reminded of what I don’t usually notice. I don’t notice that one set of traffic lights beeps when it’s time to cross, but the next one gives only visual signals. I might shift my path because crossing places are offset but anyone who depends on the information given by the tactile paving and crosses the road in a straight line will end up in the wrong place. You might be used to following audio instructions from a route mapping app but end up stuck when one side of the street is entirely closed by a temporary diversion for construction. In other places, hoardings and scaffolding are built up on the pavement itself in unpredictable ways.  Even without construction work, there’s so much everyday clutter – A-frame advertisements and multiple posts supporting signs, streetlights and cameras – that you can’t simply ‘go straight ahead’.

‘People who fit the norm don’t need to notice built space’ says Jos Boys in an interview about the feminist architecture co-operative Matrix. The exhibition ‘How We Live Now: Reimagining Spaces with Matrix Feminist Design Co-operative’ is on at the Barbican until 23 December.

The installation includes an invitation to rearrange the space by opening and closing curtains made of cloth dyed with pigments from plants that grow around the Barbican. There are designs for the Jagonari Centre in Whitechapel, designed by Matrix in a collaborative process with the centre’s members, and a contemporary film of young women learning construction skills.

Among the books by the Women’s Design Service on display is At Women’s Convenience, published in 1990. It talks about the fundamental importance of considering the needs of bodies of all kinds, at all stages of life: a basic essential so that everyone can be part of the life of the town or city.

How long the campaign for decent toilets has been going on! I took a photo to send to Caroline Russell, the Green London Assembly member who has been campaigning for more public toilets and changing places on Transport for London stations.

With At Women’s Convenience still in mind, I went into a toilet off the ground floor cafe in the Barbican. The cubicles were of beautiful pale terrazzo, smoothly curved between wall and floor, with no corners to trap dirt in. What’s more, they were wedge-shaped, wider at the door – giving enough room to step inside and turn around without bumping into bins or walls. I was so struck by these unusually shaped cubicles that I mentioned it to the woman washing her hands alongside me. She agreed but, gesturing to the baby she was carrying in a sling, pointed out that there was, however, no changing table. 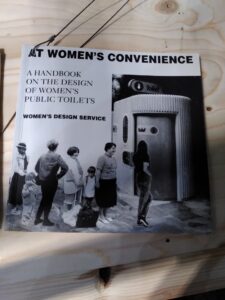