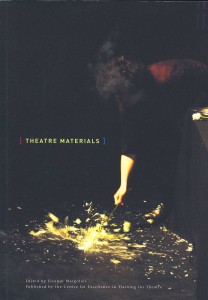 Theatre Materials is a conversation between artists, writers and practitioners about the stuff of theatre, edited by Eleanor Margolies and designed by Tom Poslett of HSAG.
Contributions include reflections on ‘six real things’ by Anne Bogart; theatre critic Robert Butler trying not to sink into a muddy swamp; scenographer Pamela Howard auditioning fur and lace for an opera set in 1950s New York; cartoonist Tim Hunkin taking off the kid gloves; Zoe Laughlin, curator of the Materials Library, smashing roses and blasting memory alloys back into shape; puppeteer and theatre designer Sean Myatt rambling around a landscape of performing objects; and professor of theatre Alan Read on anthrax, cement and the lure of material facts. Includes a directory of organisations working with materials in performance. For links to organisations involved in Greening the Theatre see here.

ISBN 978-0-9539501-5-7
Published by the Centre for Excellence in Training for Theatre, Central School of Speech and Drama

Also available at Samuel French and the National Theatre bookshop.

This site uses Akismet to reduce spam. Learn how your comment data is processed.