Julie’s Bicycle have estimated that a theatre set only represents 2% of the production’s total carbon budget; the way the audience travels to the event represents a much larger percentage. But the way a theatre treats its set has a cultural importance – it signals the company’s attitude to stuff and can send a message to audiences.

Max spoke about the culture of reuse and adaptation found in student and fringe theatre, and how until recently this has been looked down on by many people working in larger theatres. As if to differentiate themselves from ‘amateurism’, staff working in opera and subsidised theatre production departments have taken pride in making everything from scratch, from new materials.

But this is changing.

Using standard components helps with reuse. (There’s a parallel with the Walter Segal system of designing homes around standard-sized sheets of wood and plasterboard.) Max spoke about how rarely he is asked to tweak a design so that elements from stock could be used – despite being very open to such requests. One example was a drama school asking him if he would consider changing the height of the stage in his design by a few centimetres so that steeldeck legs from stock could be used, rather than cutting new ones. In this case, he was happy to agree.

There seems to be a communication gap between production departments and designers, exacerbated by tight schedules, with neither department able to push for the ecological choices they say they want to make. Production managers and stage managers have a crucial role in closing this gap.

Max described a future in which an eco-assessment will be as routine as a health and safety risk assessment. If a director and designer want to break a glass on stage or have a character fly across the auditorium for artistic reasons, a good production manager will not declare it’s impossible. They will draw on previous experience to assess the risk, and explore how to reduce it. Similarly, an assessment of the environmental risk posed by materials and processes will become normal. A carbon budget should be kept alongside the finance budget.

Reuse is key in achieving artistic aims while reducing environmental impact. It’s not possible to reuse everything on your own – you need partners. Networks, both digital and physical, enable sharing. Storage space is expensive, and trucking equipment from central stores has a carbon cost too. But, says Max, in theatrical hubs like London and Bristol, it should be possible for a group of theatres to establish sharing partnerships – one stores the drapes, the other the chairs.

His ‘modelbox library‘ addresses one particular (small but significant) area of waste. The modelbox is the scale model of the theatre space that is used as the frame for the design of a particular production. If theatres kept a well-made, sturdy modelbox of their own building to lend to incoming, freelance designers, they would not have to spend time, money and resources creating a new modelbox for each production.

Molly mentioned the importance of good records: while stores of lighting equipment are usually well documented, it can be harder to find out how many drapes – and in what condition – are available in a particular theatre.

Reuse won’t answer every theatrical problem – especially when creating new and fantastical worlds that have never been seen before. Max suggested that when a unique object needs to be made – a sculpture for a pantomime castle or for a one-off event – it can be made of biodegradable materials. Perhaps cast in paper pulp instead of plastic. This would of course, allow us to compost old props… 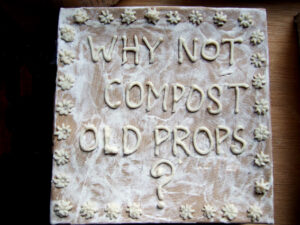